The Treaty on the Prohibition of Nuclear Weapons (TPNW) initiative via the United Nations, supported by civil society groups in the UK and elsewhere

What is the TPNW?

Governments opposed to the initiative, and campaigners’ responses

All the webpages above are suitable for higher-ability KS3 or GCSE students, although they could potentially be scaffolded for differentiation. 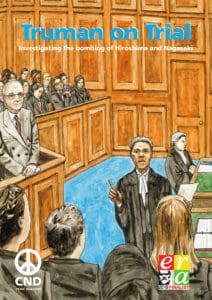