In 1945, the United States Air Force dropped atomic bombs on the Japanese cities of Hiroshima and Nagasaki with tragic and devastating consequences. Hundreds of thousands of people died, many instantaneously, others soon after from burns and shock, and yet more from the impact of radiation in the months and years that followed. By 1950, an estimated 340,000 people had died as a result of the two bombs.

The city of Hiroshima stands on a flat river delta on the Japanese mainland, Honshu. At quarter past eight on the morning of 6 August 1945, the US plane Enola Gay dropped an atomic bomb on the city centre, a busy residential and business district, crowded with people going about their daily business. The bomb, called ‘Little Boy’ because of its long, thin shape, was made from uranium-235. Unimpeded by hills or natural features to limit the blast, the fireball created by that single bomb destroyed 13 square kilometres of the city. 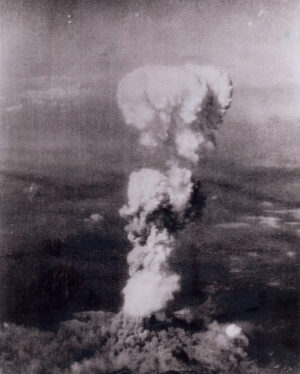 The atomic cloud over Hiroshima after the bomb hit

The heart of the explosion reached a temperature of several million degrees centigrade, resulting in a heat flash over a wide area, vaporising all human tissue. Within a radius of half a mile of the centre of the blast, every person was killed. All that was left of people caught out in the open were their shadows burnt into stone. Beyond this central area, people were killed by the heat and blast waves, either out in the open or inside buildings collapsing and bursting into flame. In this area the immediate death rate was over 90 per cent. The firestorm created hurricane-force winds, spreading and intensifying the fire. Almost 63 per cent of the buildings of Hiroshima were completely destroyed and nearly 92 per cent of the structures in the city were either destroyed or damaged by the blast and fire. The total number of deaths was hard to establish, but at least 75,000 died in the first hours after the bomb was dropped, with around 140,000 dead by December 1945. The death toll reached around 200,000 by the end of 1950.

Many of those who survived the immediate blast died shortly afterwards from fatal burns. Others with possibly less fatal injuries died because of the breakdown of rescue and medical services, much of which had been destroyed, with personnel themselves killed. Within two or three days, radiation victims who were near the hypocentre developed symptoms such as nausea, vomiting, bloody diarrhoea and hair loss. Most died within a week. Radiation victims further away from the explosion developed symptoms one to four weeks after the explosion. Many survivors – known in Japanese as hibakusha – still suffer to this day from the impact of radiation. Pregnant women who survived the bomb faced additional horrors, for the bomb had a terrible impact on a foetus. Many were stillborn, but those born alive faced higher infant mortality rates than normal, or had abnormally small skulls, often suffering from mental disabilities. From about 1960 a higher rate of cancer became evident, in particular of the thyroid, breast, lung and salivary gland. 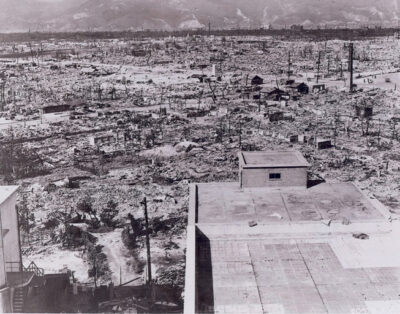 This is how Hiroshima looked after the bomb

Radiation is known to cause many types of cancer, and Japanese scientific research has now shown a direct correlation between the distance from the atomic bomb hypocentre, the probable exposure dose of radiation and cancer rates.