On 9 August, the US dropped a second atom bomb on the Japanese city of Nagasaki. This bomb, named ‘Fat Man’ because of its rounder and fatter shape, was more powerful than that dropped at Hiroshima and was made from plutonium-239. Nagasaki is a city built on hills, which affected the immediate impact of the bomb. The explosion took place in the Urakami valley, which meant that the physical destruction of that area was even greater than at Hiroshima. Other parts of the city, however, were shielded to some extent by hills.

Around 23 per cent of Nagasaki’s buildings were destroyed by the blast and fire and over 40,000 deaths occurred in the first few seconds. 70,000 people were dead as a result of the bomb by the end of 1945, and around 140,000 by the end of 1950. Virtually every living thing within three-fifths of a mile from the centre of the blast was immediately destroyed. Beyond this central area, people died in a similar pattern to Hiroshima, from the impact of fire, falling buildings and untreated burns and other injuries, depending on their distance from the centre of the blast. 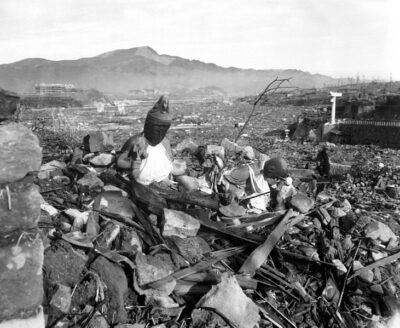 A temple destroyed by the nuclear bomb in Nagasaki

Deaths from atomic radiation followed in large quantities, many within a few days, but other people faced suffering and eventual death in the years that followed. Even today the effects continue, and more dead and deformed babies are born in these areas than in other places.